He is toothless and he is sixty,
And he is haunted by the time,when he used to walk swiftly
And he is still enmeshed
In the desires of flesh
So must he copulate,
They say, it's never too late!

Every word has a varied meaning to varied people, It is dependant on their past experiences and knowledge of that word. Though the word also carries with it ,its common cultural meaning and representation.

Word sex - has an aura of fancy,desire,secrecy,morality,excitement,pleasure
In a way sex has given birth to religion and their caretakers, who have assumed power and significance by making man conscious of this compulsive and powerful drive which has overwhelmed him since the birth of the mind!.

Two to tango!-Sex requires "the other", and apart from the physical interaction, more importantly it is a mental relationship of two images. One's self image which is sum total of knowledge about self (ones physical make-up,tastes,preferences etc etc] and the other persons image, which one builds, based on the perception of there past interactions.
The other is must, even in auto indulgence, the fictitious image of other precedes the act. The center of sex lies in the mind and not elsewhere. The" build up", which is a mental imagery of the act and anticipation is mandatory for a sexual act to occur.All thoughts have their roots in desire .

With millions of sensory inputs all around us, our mind filters various inputs as per ones requirement. So taking an instance where one is sitting in a cafe with a beautiful girl sitting across amongst the scores of people around ,the mind filters other inputs other noises,people and the details of the cafe and most of the attention is grabbed by the girl,
provided the guy is straight and not pre-occupied with something which holds more importance at that point of time. The perception of a girl leads to one's making an image of her as per his conditioning and memory and if she is close to his desired image of opposite sex, it may lead to a build up in which the fantasy may run amok ,leaving the guy stimulated, seeking her in his wild imagination and at times pushing him to make an advance towards her!!!!.

The cycle starts with (filtered) sensory inputs leading to perception as per ones data base and then seeking which may or may not lead to the act (sexual)itself. All our endeavors are pleasure driven, it may be unfortunate but that is how it is!
There is no basic difference between the pleasure gained by spiritual advancement, social work, a feast ,an intellectual or professional achievement ,seeking enlightenment and sex!!

The mind has been conditioned for ages in believing that religious 'highs' are sacred and something to be seek ed, whereas in essence it is just the same pleasure seeking of the center 'I'. Thus all pleasures are private, though one may jabber about the physical and spiritual union in sex, the fact is that it is "self"- centric as all our actions stem from this personal center , we call "I'. One uses another for their gratification!
But men you are born clever , though not wise!
You will gold plate lust with love , sounding so lovely and nice!

Everyone has ones own unique sexual proclivities and preferences of there sexual mate from skinny to voluptuous, hairy to clean- shaven, younger to older ones , within or without the wedlock, gentle to domineering. There is homo and heterosexuality and other varied sexual interests and preferences....all hinged on the gene bearing double helix of ones D.N.A Its up to the mind to perceive a certain ,an act or a sound to be sexually stimulating, however weird it may be to someone else.
So all "sexual dysfunctions" including impotency and frigidity are dealt with by focusing on the psyche and thus most sexual problems are psycho-sexual problems.
Tantra or tantric sex is flourishing world wide promising a divine union through heightened sensation of the body ,Knowing mind to be the origin point of sex, it has devised various sexual exercises which exploits one's imaginative faculty to make the body more sensitive . It has also conditioned its followers by associating sex with spirituality by using hymns,mantras and its philosophy in believing it to be sacred .

.....all in the mind as they say...God or no god,.at least the folks are enjoying it shedding their guilt ,which is enforced for ages by the priests to keep people everlastingly working for the ideal moral state as they themselves hold the rein of the society .

Rajneesh came into limelight in the seventies by his liberal exposition on sex which was highly welcomed by then sexually repressed western society. The rebel in the form of hippie culture was budding and it latched on to his tantric philosophy after being pushed to the corner by the orthodox Catholics. The " spiritual masters" had devised a process familiar amongst the spiritual seekers as kundalini awakening through intercourse with an awakened being and exploited the gullible disciple sexually ,emotionally and monetarily !!!!! It was taught that by being conscious of the sexual act, one can become enlightened or be free from the bondage of self.

Knowing well the falseness of duality,
I am a saint who often finds himself in oscillation

Aspiring to be free of time,
I am a saint who is sometimes busy in memories and sometimes in anticipations


The orgasm indeed is the closest one can get to the "selfless" "timeless" and "space less" experience, though it is it is still in the realm of experience with a experiencer!. An extensive study by a U.S university revealed that an average person thinks about sex about every 5-7 minutes! in some form or the other. Why is an act which lasts for a few minutes haunt human being all the time? "I" pursues his desires to sustain and inflate itself and sexual act is probably the most potent tool of pleasure available through which the"I" maintains its continuity.

Sex is the most discussed subjects amongst the religious people,by condemning it all the time they fail to realize their obsession with it.and by preaching suppression or celibacy , they remain unaware of their fool hardiness of pushing the conflict deeper .The yogic way or the way of the will is an eternal fight of two set of thoughts encouraging dichotomy in an already divided man. The orthodox states as in South  Asia who harp on there moral and cultural values have given rise to the sexually frustrated, perverted and hypocritical society with alarming prostitution and sexual crimes.

All animals are driven to sex by the biological force to reproduce another being of the same species and they perform sex only at certain periods of time governed by the environmental conditions, whereas in man it is a device to achieve pleasure and he can indulge in at any time just like he can eat irrespective of his body needs or hunger.Indeed animals are more natural!!

The obsession with sex is because of one's continuous  psychological movement  forever seeking repetition of  pleasurable sensation of past , sex is thus more anticipatory, acts just lasts for a very brief  period but with help of  help of thought one chases it for eternity!

Pre -marital ,post marital, extra marital ,incestuous sex are essentially the same as they are just the same pursuit of pleasure of the mind. Social framework has induced a concept of morality dissuading sex out of marriage to keep its status -quo and indeed it will be impractical[and not immoral] to encourage promiscuity as it is a threat to the very foundation of the society. If there were an apparatus to read ones thoughts ,one would be shocked to infer that humans of all walks and all ages! are pre-occupied with sex and are infidel mentally and they are haunted by sex Sex will remain as a problem as long as our obsession with it remains . Can it be left in its assigned space?

As long as ones individual identity or"I" remains , the constant pursuit for sensual pleasure will remain and sex will keep on spilling itself in all walks of our lives, expressed or suppressed!

Her lips squeezing my lips and my hands caressing her soft hands,
as we lay entangled on the cool summer sands

And suddenly a firm familiar voice,telling that I am not here for all this,
splits me into two halves
one seeks god and other busy with sensual pursuits
I'd rather sip my wine and enjoy the forbidden fruit

At least I'll be undivided
either left or right sided!
Posted by Dr Vikas Khanna at 12:11 AM 1 comment:

how often sex is on your mind 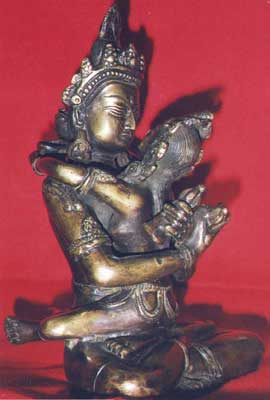